This morning we had a walking tour of Koblenz, which is where the Rhine and the Moselle rivers meet.  We were actually docked on the Moselle although when we left we made the turn back onto the Rhine.

At the confluence of the river there is the famous horseback statue of the King of Prussia and first German Emperor Wilhelm I. Our guide shared a lot about the history and was pretty negative about the French influence!

This statue was put up on the wall during one of the many times the town was flooded.  People believe that as long as she is watching, floods won’t happen.  But they do anyway because of the two rivers meeting here – as you can see with our guide pointing out the river levels at various times of flooding. 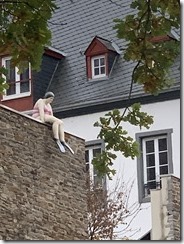 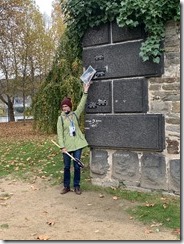 We visited several churches and statues.  There are parts of the Berlin wall on exhibit here. 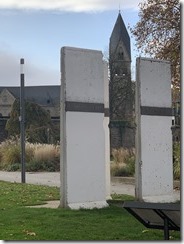 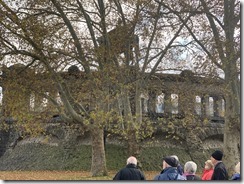 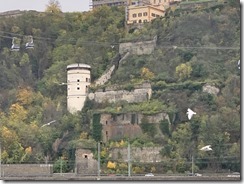 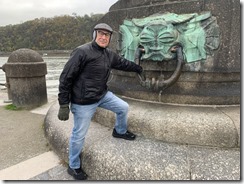 Have to have at least one dog photo!

The thumb is an 8 foot tall brass thumb sticking out of the ground, in front of the art museum.

This 35 foot statue chronicles the history of the city from its beginning as a Roman settlement up through World War II. 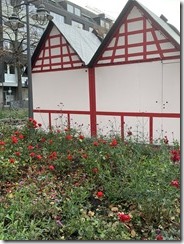 There are many wonderful squares here and they are setting up for the Christmas markets. 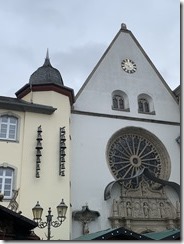 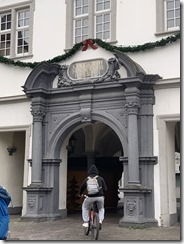 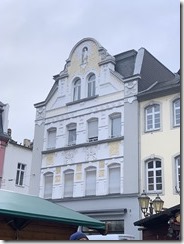 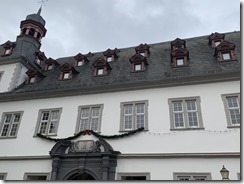 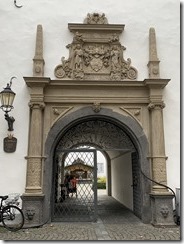 Our guide told us that during the French period between 1794 and 1814 and continuing afterward, a large number of children who were born to French and German parents were named Jean. The popular name later morphed into the Schang per the local dialect and then into Schängel, which became a moniker for the residents of the region.

The most famous Schängel is a statue of a little prankster that periodically spits on unsuspecting tourists from his fountain perch on Willi-Hörter-Platz. The base of the fountain, built in 1941, contains bas reliefs of young boys engaged in other mischief, such as smoking, fighting, and mocking their elders. An inscription identifies the mischievous Schängel as the symbol of the town, and he graces manhole covers all across the town. The spitting feature was not on when we visited because of the coming winter season. 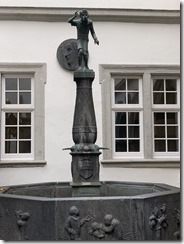 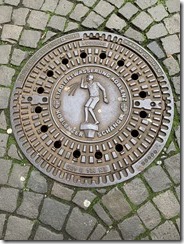 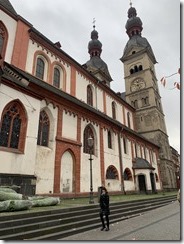 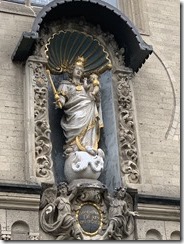 This clock on the Mittelrheinisches Museum  is a unique feature. As the clock strikes the half hour, the man’s  red tongue sticks out at the passersby. This is the face of highway robber baron Johann von Kobem who was beheaded in 1536. Now he gets his revenge on the townspeople every half hour. We saw it at 10:30 AM. Local legend says that if you see him sticking his tongue out, it will bring you luck. His eyes seem to follow you too! 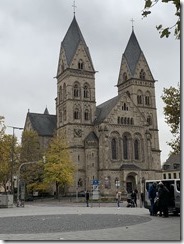 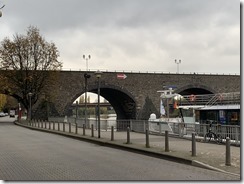 It was another interesting and charming town with lots of history.

Tonight, we had the Captain’s dinner.  We had cocktails and appetizers in the lounge first, with an introduction of all the staff on the ship, followed by a delicious dinner. The photos are of the captain and Gabor and Jessie, our concierge and cruise director.  Jessie even wrote a poem for us and read it during the cocktail hour.  I loved the napkin folding with the paper bow tie. 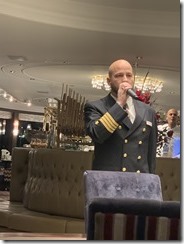 Tonight we sail for Cologne and we will leave the ship at 6:30 AM to travel to the Dusseldorf airport for our flight back home.

What a wonderful experience we had – seeing so many places we had not visited before and sailing on this beautiful river boat.

This entry was posted in Europe, Europe trip and river cruise, Excursions, November. Bookmark the permalink.