At sea, cruising the Atlantic Ocean

Posted on December 9, 2015 by patmathews

When we got back to the ship from Luanda yesterday, we heard lots of stories about Angola.  John Freedman, one of our enrichment lecturers, said that the two most corrupt countries in the world are Haiti and Angola.  We heard that a group of our passengers were in a taxi when it was stopped by the police who demanded money from them.  We didn’t have any problems like that, but we did see that the money coming into the country from the oil and diamonds certainly isn’t going to the ordinary people.  The leaders head the corruption apparently. And the harbor during our sailaway was the filthiest we have seen anywhere in the world. Sad from a country with such potential.

We had dinner in Toscana, the Italian restaurant on board, and while we were having our dinner, a beautiful gingerbread house appeared in the restaurant.  After dinner as we traveled around the ship, they seemed to be popping up everywhere!  We heard from the head chef, Mario, that they have 5 extra chefs on board for this holiday segment of the cruise – 71 now up from the usual 67.  That’s a lot of chefs.  But from seeing the beauty of these gingerbread houses, each one different, I can see they have already been kept busy!Around the gingerbread houses there are constantly refilled plates of freshly baked cookies, cakes,candy canes, dried fruits and nuts. Lovely!

Toscana before the dinner hour 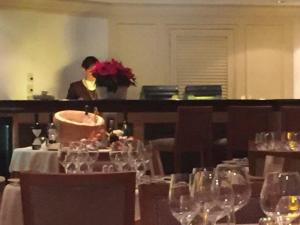 That big thing to the left is a huge wheel of parmesan cheese, always found in Toscana along with the olive oil and balsamic vinegar menu and freshly roasted garlic with the home baked breads. Yum!

Then while I was in the casino, the crew from the ship was decorating all around.  Here are a few shots, I am sure I will have many more before we disembark on January 4. 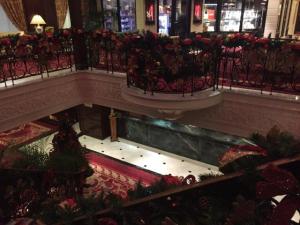 Today we crossed the equator again, going back north, so, there was another equator crossing ceremony for those who have never crossed to become Shellbacks.  I, of course, have crossed several times so I was just an observer, but I did get my picture taken with King Neptune!

The captain checks things out

The lovely Mona, a world cruise friend, prepares to become a shellback (she was off the ship for the first crossing) 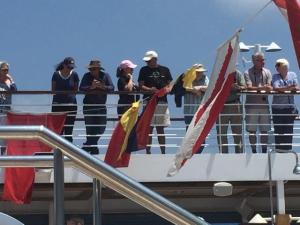 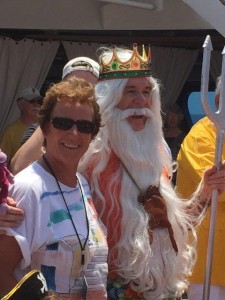 This entry was posted in Africa, At Sea, December, World Cruise 1. Bookmark the permalink.

3 Responses to At sea, cruising the Atlantic Ocean