During breakfast, we had the lovely sunrise sky on our sail in to Manzanillo.

Manzanillo is known as the Sailfish Capital of the World. There are many tournaments here, the main international one is held every November – this is for professionals and the top prize is 1 million pesos.

There is a large sculpture of a Marlin that greets us in the square just off the harbor.

We always seem to have such great guides and today was no exception for our tour – the Cuyutlan Turtle Experience. I have to say it was one of the BEST TOURS EVER and you will see why!

First a bit about Manzanilla. From a few years ago when only about 5 or 6 ships docked here, now there are about 32 in a season. This is largely because ships are avoiding Acapulco because of crime. This town seems very safe and nice. It is part of the “Mexican Riviera” – Manzanillo, Puerto Vallarta and Mazatlan. It is an important port town of 170,000 and 10% of the population works in the port where 3 million containers arrive and depart each year.

Tourism is important but also agriculture – coconuts, mangoes, bananas, papayas and limes are the main crops. It takes 6.5 years for a tree to produce coconuts but they continue to produce for 60 – 70 years. We passed many plantations on the way to Cuyutlan.

We drove along the Pacific coastline, and also between the lagoon and the ocean. Very pretty drive. 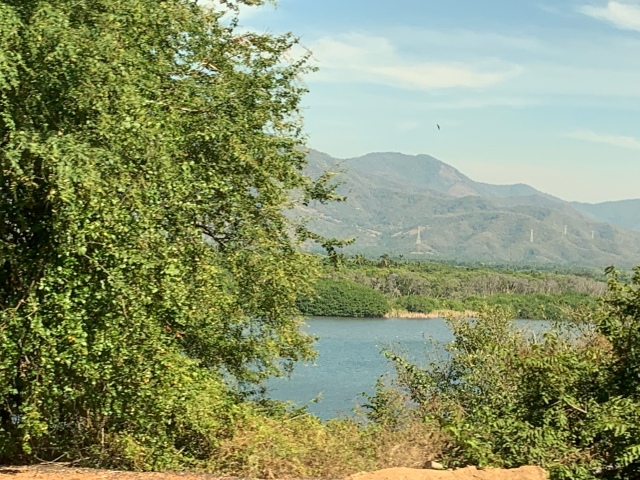 The town of Cutyutlan is very small – 900 population. But what we came to see is El Tortugario, an ecological center (all funded by donations) that cares for sea turtles, crocodiles and iguanas are cared for. And we gave them a donation.

The turtles return to the same place after 25 years to lay their eggs. Unfortunately due to predators, only 1% of the hatchlings survive. Three of the world’s eight species of sea turtle live along this section of the Pacific Coast – the Pacific Black, Golfina and Laud.

Here is the difference in sizes.

First we saw a short film about the Center. Then, we observed the iguanas and the crocodiles – large ones and one baby. 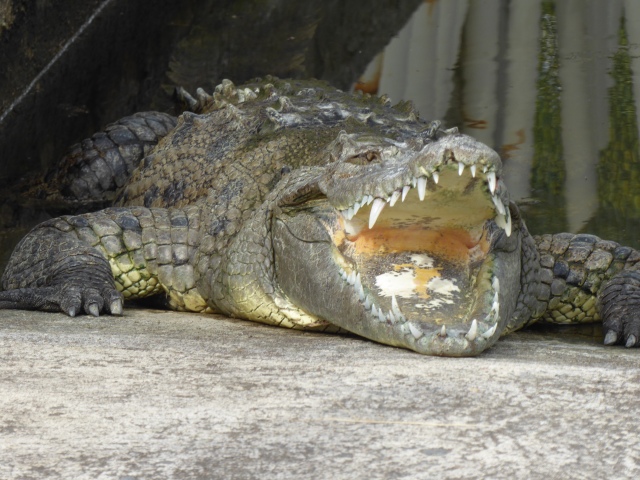 Is he yawning or just showing off? 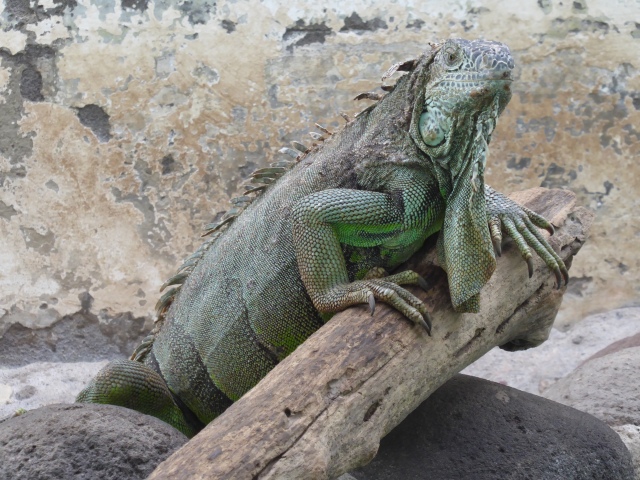 This one is about to become a mama!

There are round pools with all of the sea turtles. We took lots of pictures, but here are just a few.

They have a large area where they keep the eggs from the predators, they mark the date they are collected and when the hatchlings are due they cover the eggs with screens. We were lucky that some hatched today. Then the total surprise and the absolutely BEST part. We each got to hold one of the new hatchlings and all at the same time, release them into the ocean. There was a strict protocol of how to hold them, where to stand and how to release them. I named mine “Mr. T” and I believe he will be one of the 1%! 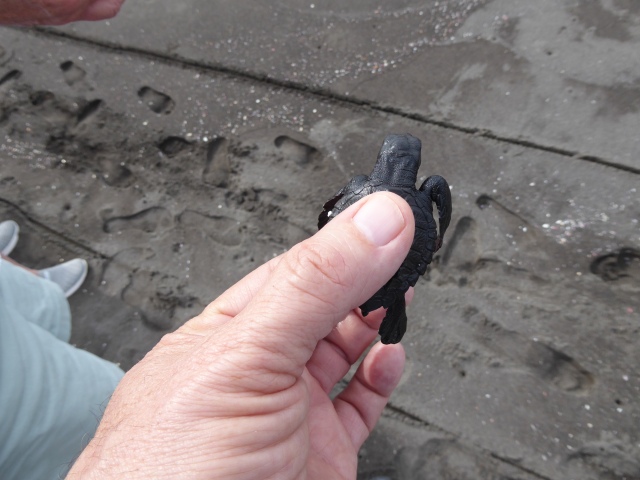 You can see the lines in the sand. We had to stand behind both, then when ready to release the turtle, we all stepped in between and released them on “3”! 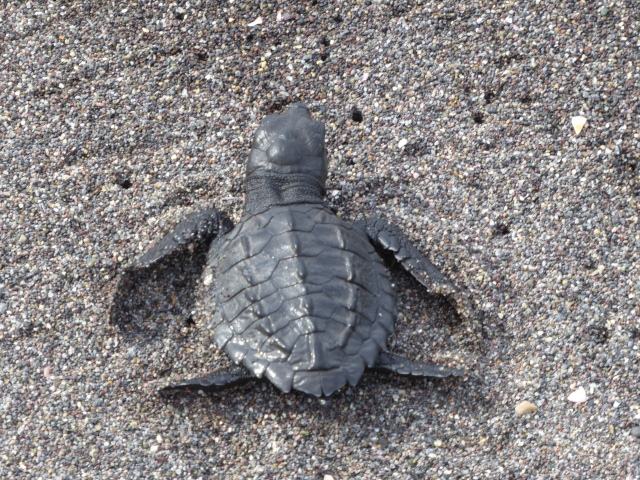 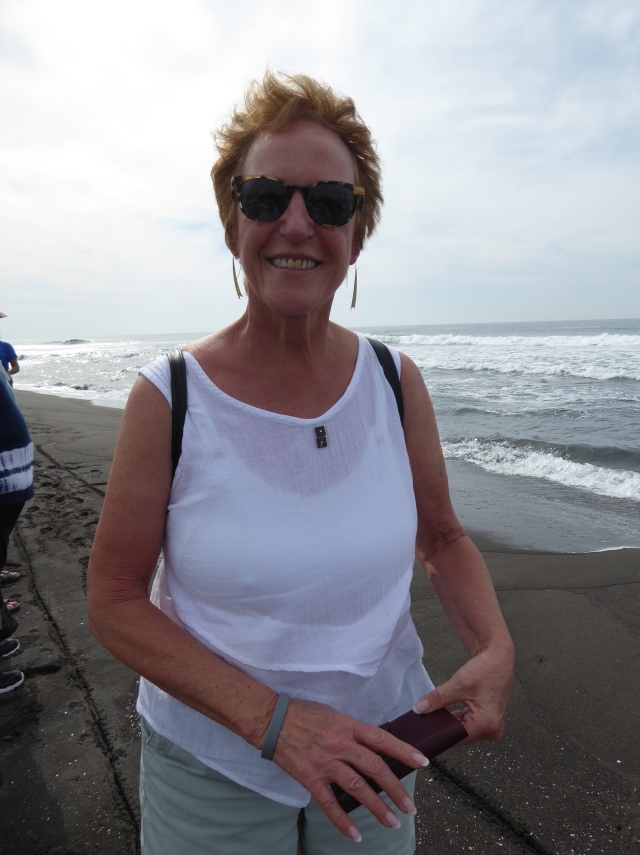 I have a video but not sure it will load, so I may add it another day when I have faster wifi. These pictures take a long time – I am still trying to find a way to get them on my computer where I can use the easier method I have used in the past to do the posts. Still working on that – it worked fine with my previous laptop and iPhone but for some reason not with the new ones. So watch for it as a separate post, maybe from Los Angeles if I can find fast wifi.

After the turtles, we went to the salt museum where we learned the methods that have been used over the years to extract sea salt. Very interesting! There are huge piles of salt near the warehouses and a man was packaging it for sale.

Our last stop was the Cuyutlan Beach where we had a light lunch, time to stroll around and shop and enjoy the beach. The sand is the fine black volcanic sand. There were hardly any people there, but Francisco says on the weekends it is very crowded.

Back at the ship, I took a stroll around town while Norm went back to our suite. Our artist on board was there with one of his pieces. We had a chat – he has a gallery in Philadelphia! 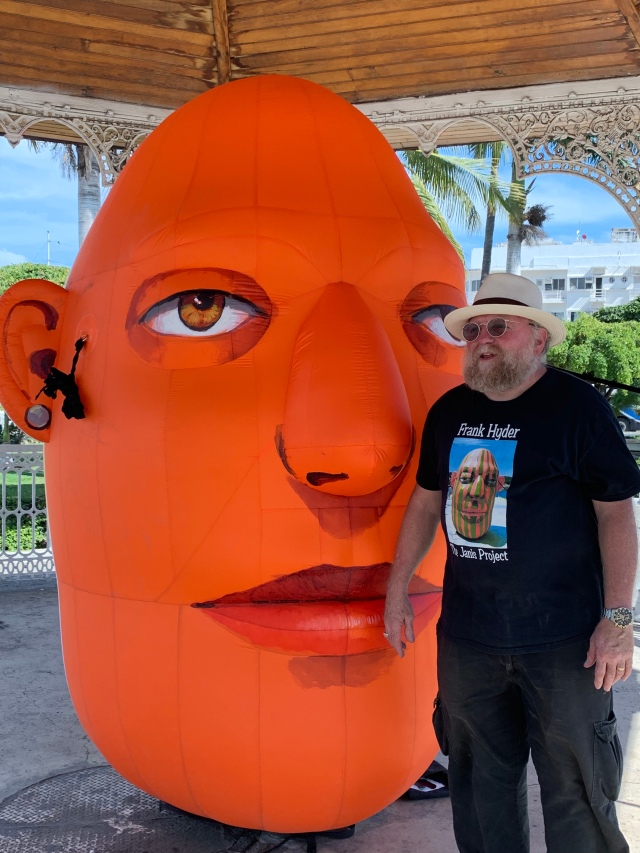 Heading to Puerto Vallarta tomorrow. We were on a waiting list for the Jeep Safari and Beach Adventure – and just got notified that 2 spots opened up!

This entry was posted in Excursions, January, Mexico, World Cruise 3. Bookmark the permalink.